WHICH LAMINATOR DOES WHAT?

A NOT-TOO-DETAILED OVERVIEW OF THE DIFFERENT LAMINATOR MODELS 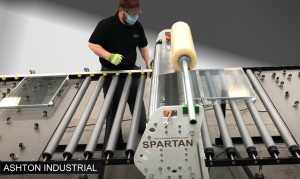 SPARTAN is the popular low cost ENTRY-LEVEL choice, uncomplicated yet nevertheless robustly built from top quality components. The standard applicator requires no power supply, glass is pulled through the laminator by a smooth gearbox connected to a manual crank handle. Simple and effective, de-skilled operation. There are no cutters, the offside edge is trimmed manually with a hand held knife, which is also used to split panels nose-to-tail. Manual infeed and exit conveyors with a

combination of rollers and castor balls, 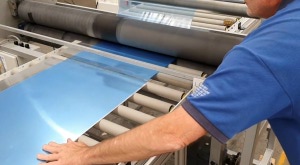 The DS applies film to upper and lower surfaces simultaneously and is ideal for protecting IGU Insulating Glass Units. It can also be operated for single-sided operations. The exit table incorporates a drawbridge for easy access when changing the lower film reel. Working widths 1300 and 1600mm. See the video here

SPARTAN-M is the model designation if you choose to motorise the laminator drive rather than use the standard hand cranked version. Foot pedal  stop-start, and machinery directive finger guards and reach-in guards.

SAXON is a simple low cost model similar to the motorised SPARTAN-M but in somewhat heavier duty construction to facilitate wider working widths up to 2000mm. It comes with a single set of driven laminator rolls and machinery safety finger and reach-in guarding. Standard is with manual feed and exit, optionally driven conveyors can be specified. There are no cutters, all trims are made manually with a hand knife including the separation nose-to-tail between panels. Panes of uniform thickness can be run side by side or even in optimised batches. The laminating speed is around 20 secs for 3m long panel, add the time for manual hand knife trimming.

STILETTO has a single set of driven laminator rollers and is fitted with an automatic cutter on a driven traverse which applies a row of perforations to the film web, before it is laid on the glass, nose-to-tail between panels. Separation is just a quick manual tug, no blades required, and can be seen in the video link here. 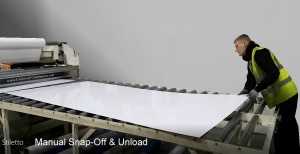 There are no longitudinal cutters. Stiletto has fixed size datum wheels so any waste trim is on the offside only, for manual removal using a hand knife. To restrict the waste width to manageable proportions it is recommended to have varying film widths (spare mandrels) and to group production according to panel widths.

Alternatively panels of uniform thickness can be run side-by-side. Where these have differing lengths, the cross-cut perforator can be manually triggered for each one.Working widths up to 2600mm. Infeed is driven with a sensor to register each trailing glass edge for the cross-cutter. Exit is usually a non-driven rollers and castors combination but can optionally be specified to be driven. 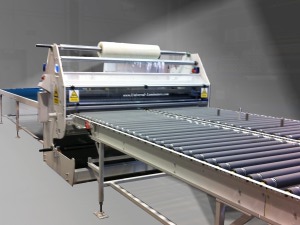 STILETTO-PLUS has the addition of a longitudinal cutter that automatically perforates a trim line on the offside long edge of each glass for simple peel-off by the operator. Width positioning is done by the operator with the aid of a handwheel and laser pointer. Infeed is driven with a sensor to register each trailing glass edge for the cross-cutter. Exit is usually a non-driven rollers and castors combination but can optionally be specified to be driven.. 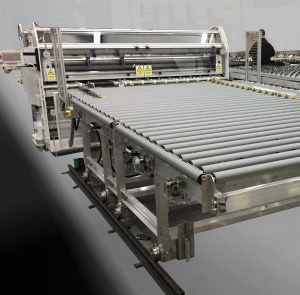 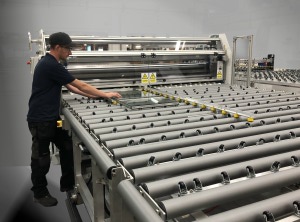 BROADSWORD delivers the advantages of driven in and out conveyors, with double laminating rollers to facilitate its AUTOMATIC SNAP-OFF function. Panels are separated fully automatically as they exit the laminator. The standard model has automatic cross-cutting, a fixed guide wheel datum side, and the one longitudinal offside edge is manually trimmed.

BROADSWORD-PLUS has the addition of a longitudinal cutter that automatically perforates a trim line on the offside long edge of each glass for simple peel-off by the operator. Width positioning is done by the operator with the aid of a handwheel and laser pointer.   BROADSWORD-  SS (single sided)  DS (Double sided)

OPTISTREAM is specifically designed for double sided application to insulating glass units (IGU). It is base around the Broadsword design with two pairs of laminatng rollers, which are required for automatic snap-off. Automatic cross-cutting and two longitudinal slitters as standard which automatically set to each panel width, positioned by stepper motors using positional data generated from datums on the infeed conveyor. Minimum glass length 12″ /300mm (option) or 700mm (std). Typical time ca.18-20 secs.

Best choice when random size panels within a reasonable range of widths, are to be passed through a single film reel width. The film width would be selected to cater for the widest panels, so offcut trims will be generated either side when narrower panels are processed. Longitudinal side cutters on inside and offside means work goes thru approximately centred, therefore waste trims are relatively evenly distributed to either side. This reduces risk of uneven tension of the film.

Slitter adjustments are set automatically with stepper motors linked to datum bars on the infeed conveyor, against which the operator loads the panels.

UNIQUE FEATURE: Each IGU is automatically provided with TWO perforated lines on each side. The first facilitates trimming to the glass size, the second provides an Easy-Peel border. This border can be peeled off at any time – it can stay on the unit right up to the point of glazing. Even then only the border is peeled off, the main body of film stays in situ to protect the glass surfaces until handover.

Automatic snap-off nose-to-tail separates the panels at the exit of the laminator. Driven in and out.

To cater for narrower panels without generating excessive offcuts it is necessary to change the film reel to a smaller width. One or more can be pre-loaded on spare mandrels for a relatively quick change. This is the best choice for customers wanting Easy-Peel glazing borders on all 4 sides. 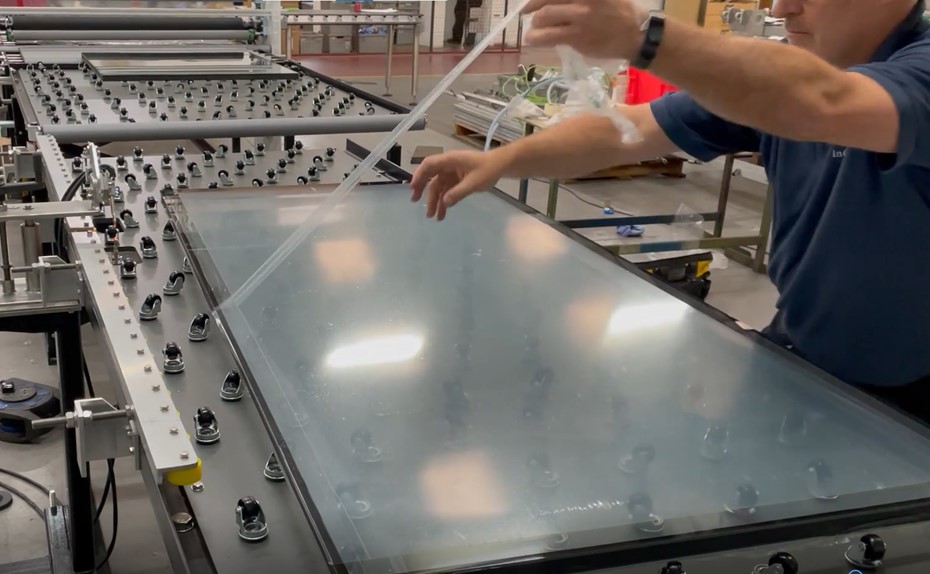 – designed as a low cost option to take the cost and the skill out of trimming protective film from the perimeter of insulating glass units, used in conjunction with any of our double-sided laminator models.

Upper and lower surfaces are processed simultaneously, negating any need to flip units over. Less manual handling means less risk of damage to product, or injury to operators. Unskilled labour can master the operation within minutes.

The scored borders can be peeled off right away, or be left in place right up to the moment the IGU’s are to be set in their window frames.

Video action can be seen here

is a concept using two Machines, operating in tandem and located on opposite datums:

There are no longitudinal cutters, because film excess simply overlaps on, and stays on, the panels.

The benefits are speed, there are no longitudinal cutters to be adjusted, and no trims to peel off and dispose of. DUO is practical where the width range limits of panels are within a 1:2 ratio between minimum and maximum.

Any panel wider than 1250mm gets filmed in two strips with an overlapping film join remaining on the panel. No trimming, no manual removal or disposal of trims required.

A panel of say 1600mm width would therefore have a 1250mm strip of film applied on each side, with the excess overlapping in the middle.

Panels less than 1250mm width, which would have untrimmed film overhanging on one edge, can be accommodated by unloading at the intermediate conveyor between the two laminators, after passing through laminator #1 only. These can be manually trimmed on the one long edge by hand knife.

In this way, frequent film reel changes can be avoided when processing mixed or random size work.

The same effect can be achieved with a single machine by passing each unit through twice.

EXAMPLE OF FILMING IN OVERLAPPING MODE

In overlapping mode, any number of different glass widths can be filmed in a single or double pass.

In this picture sequence, a double-sided SPARTAN is applying film to upper and lower surfaces of I G Units simultaneously. A film width of 500mm is mounted top and bottom, but any width of film can be selected.

When units are wider than 500mm, a strip of film is applied aligned to the left-hand datum. The unit is turned so on the second pass, a second strip is applied in the same way. Excess film overlaps in the middle of the unit, eliminating the need for trims. Units are separated nose-to-tail with a simple hand knife.

When units are narrower than 500mm they are filmed in a single pass, and one long edge needs to be trimmed.

Th same principle can be applied to the single-sided SPARTAN when filming mono glass products, or applying anti-shatter film to mirrors.