FACT! DIAMOND BELTS COST HALF AS MUCH AS SILICONE CARBIDE

Initially of course, the price per belt is considerably more but look at these examples and work out the true cost, bearing in mind SIC belts last no more than 4 to 6 hours in continuous production on a manual arrisser / seamer.

Not just the long life, but the increased yields and reduced downtime, and the elimination of re-makes due to surface scratches all contribute to the cost advantages.
. 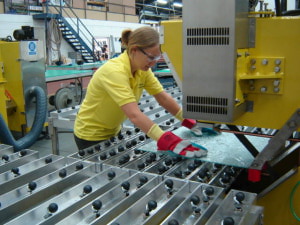 .
EXAMPLE based on real customer feedback:
In a 15-week period running double shifts:

.
All that for around a third of the cost of SIC !

.
One company in Manchester, England reported an average of 12 to 15 weeks, double-shift operation, from each pair of belts used on a manually operated ASHTON cross belt machine, top and bottom seam all round on 4mm and 6mm thick glass.

.
A leading USA glass group ran a set of 8 diamond belts on their ASHTON seaming line for almost a whole year processing mainly 3mm thick glass with ca. 0.4mm upper and lower seams all round.

.
More real feed-back from users in full-out production indicate that a set of 8 3350 x 100mm belts on an automatic ASHTON line will average double shift for between 15 to 25 weeks, depending on volume of production and amount of glass removal.