.
In over a decade of close co-operation between KGS and ASHTON INDUSTRIAL, we believe we have evolved the perfect diamond grinding belts specifically for edge grinding and seaming of glass sheets on ASHTON’s heavy-duty automatic and manually operated machines. 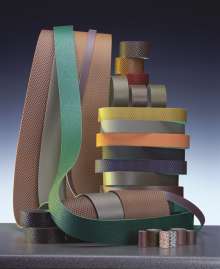 Clients report dramatic reductions in the number of glass pieces lost in the quench, due to the fine diamond-ground finish.

Surface scratching problems are virtually eliminated at a stroke, because the damaging loose particles of grit from standard SIC belts are simply not present in diamond belts.

.
Downtime for changing belts mid-shift is eliminated due to the long life of diamond belts (25 minutes a shift lost to belt changes is 5% of your production wasted when using Silicone Carbide belts).

.
Amazing results are being achieved, on both automatic arrissing lines and on manually operated stand-alone machines.

.
What kind of life can you expect from FLEXIS-PLUS™ diamond belts? Let’s give you some real life examples…

.
O.K, we confess, that’s an eye-catching way to put it. The price per belt is of course much more, initially, than SIC belts, but look at these examples and work out the true cost, bearing in mind SIC belts last only hours in continuous production. Not just the long life, but the increased yields and reduced downtime, and the elimination of re-makes due to surface scratches all contribute to the cost advantages. 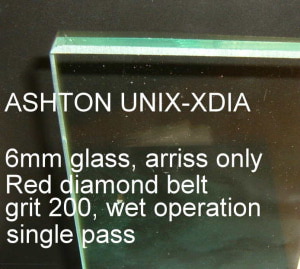 And all that for around a third of the cost !

Click the big blue <VIDEO LIBRARY> button to the left of this page to action footage.